Former international student Feifei Liao never imagined her overseas education would one day bring her to perform on stage before a live audience.

Before joining Act of Translation Reaches Out, a theatre program where she and other international student performers share personal stories unique to their international student experience in the stage show, She’ll Be Right, the Chinese graduate possessed no experience in acting – the closest she had gotten to a public performance at that point was through presentations and speeches. Her background was in banking and finance.

“I’ve made a lot of speeches with many people but acting is very different. You need to connect with audiences,” she said.

“It’s normal for you to hold yourself back. In the beginning, I spoke my lines like a robot because I simply said them.”

But putting herself in an uncomfortable situation was something Feifei was more than happy to undergo if it meant that she could improve her English, socialise with others and advocate for international students in Melbourne.

“I want to share my stories and hope the community can hear our voices,” Feifei said. “This is a very creative and powerful way to spread international students’ opinions,” Feifei said.

She worked hard on the production of the show, turning up for rehearsals and acting workshops for 18 weeks before the premiere of the show during the Melbourne Writers’ Festival in 2017. Under the tutelage and guidance of Catherine Simmonds, the show’s artistic director, she and her fellow international student performers were able to verbalise their experiences in a unique way.

“Catherine told me it’s about what you want to tell the audiences from your heart, not reading the script. The script never exists, it lies in your heart,” she said. “Then, I realised, being an actor, you are really just being yourself in real life.”

“This theatrical show actually brings my feelings and emotions out, and allows me to present myself better.”

Since that premiere, She’ll Be Right has been performed at various public institutions including RMIT University and the Immigration Museum. Currently, the show is on course for Victoria University. 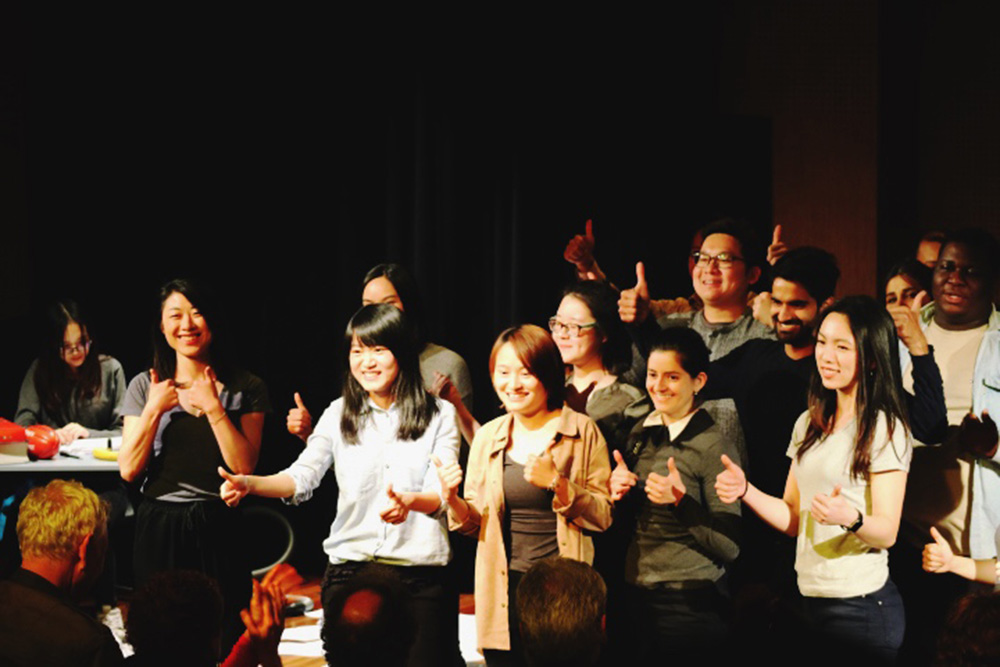 She’ll Be Right being performed before a live audience. | Photo supplied by Feifei Liao.

She’ll Be Right aims to break down general misconceptions around what an international student is and addresses the struggles and cultural barriers these students face in an hour-long performance. For Feifei, she wanted her performance to include her stories around trying to fit in with the local community and having to face language barriers and hoped others would connect with her experiences.

Beyond its themes of connection and struggle, other topics addressed in She’ll Be Right include confidence, homesickness, refugees, LGBT+ issues, relationships and identity.

In addition to her on-stage role, Feifei also serves as the Project Manager for Act of Translation Reaches Out. And while her everyday responsibilities now include developing marketing strategies, organising promotional material, managing the program’s social media channels and more, she also wishes to see more Chinese internationals break out of their comfort zone in order to improve their English.

Feifei suggests students participate more in local events, invite locals over to their place, exchange culture and network where possible.

“My English is still imperfect but I talk to them,” Feifei said. “They [would] talk about some jokes I [wouldn’t] understand at all, in the beginning, so I tried to be polite and laughed together. Now, I ask what the jokes are about. A lot of international students don’t understand but pretend they understand, and then laugh cause they don’t want to be embarrassed.”

She also would like to see more stories added to the project, and in her role as manager, is doing all she can to include more students and invite them to participate.

Citing her acting experience with She’ll Be Right as an outlet that gave her the means to better express herself, Feifei continues to build on her strong sense of confidence both on-stage and off-stage. And since undertaking those workshops almost a year ago, she feels she now understands the larger importance of what drama and performance can bring to an individual, and to the world.

“Now, I think the meaning of the theatre and the influence it brings to our life and society is far more important than being like a popular celebrity. It’s changing our and others’ lives. It’s a real social movement. It’s unique and powerful,” she said.

“In my real life, I’m like a drama queen anyway.”

Catch Feifei Liao and the rest of the cast perform at the next She’ll Be Right show happening at Victoria University’s CBD campus on May 4 from 4.30pm – 5.30pm. To stay in touch with the Act of Translation Reaches Out project, follow them on Facebook and on Instagram (aot_reachesout).

Act of  Translation and Be You Be Scene has since been completed. But keep up with Be You Be Scene’s Facebook and Instagram or contact Feifei at Feifei.liao.bybs@gmail.com to ask about their next project.