TRIGGER WARNING: This story addresses and contains sensitive content around sexual violence that may upset readers. If you are distressed by anything you see in this article, please refer to support resources at the bottom of this article.

A year ago, when Berlin-based Australian journalist Aela Callan read the Change the Course report, she felt something was amiss.

The landmark report — conducted by the Australian Human Rights Commission (AHRC), with support from Universities Australia — was the largest national inquiry into sexual assault and harassment on campus in Australia, surveying more than 30,000 students from 39 universities in 2017.

The report found more than half of all university students were sexually harassed on at least one occasion in 2016, a shocking discovery that led to national press coverage.

But what Callan identified as a potential blind spot in the report was its data around international students.

She then began to question other findings relating to international students in the survey.

“My feeling was that the survey didn’t actually try hard enough in order to get the right kinds of answers from international students and in particular, understand the cultural context and the way they will talk about the issue and things that they would like to raise,” the reporter said.

It was this hunch that inspired Callan to investigate further. She got in touch with fellow Australian journalist and anti-sexual assault advocate, Nina Funnell, to uncover the issues lying at the heart of sexual harassment and assault towards international students in Australia.

Their work culminated in a short documentary, Australia: Rape on Campus, and was broadcast on Al Jazeera’s current affairs programme, East 101, in April.

For ten years, Callan has worked as a foreign correspondent in Southeast Asia where her reporting has largely centered around political and social issues in the wider Asian region. The reporter is best known for her investigative documentaries, which include her award-winning exploration on sexual violence in Cambodia, It’s a Man’s World: Rape in Cambodia.

Yet despite her experience, producing a film on Australia’s international students would prove difficult for reasons even Callan’s colleagues had warned her about.

“This is a film that no Australian media has made, and this is the film that they are not likely to make because it is so very hard to get international students to speak,” Callan said.

She first sought assistance from international student representatives and organisations on university campuses but came up short when they too found it difficult to refer young women who wanted to speak. Callan then turned to women’s officers at universities and other activist communities, only to learn that few had specifically worked with international students.

“This is a film that no Australian media has made, and this is the film that they are not likely to make because it is so very hard to get international students to speak.”

It was at the Centre for Culture, Ethnicity and Health (CEH) where Callan found success. At CEH, the reporter convened a series of roundtable discussions where students and peer educators talked about their everyday lives. The young women shared stories of financial hardships, struggles in their studies and described their feelings of loneliness and how they felt isolated on campus — all common circumstances that foreign students face.

“We just talked and it was really up to them about what they wanted to say,” Callan said.

Conversations also included discussions around their experiences with Australian men, boyfriends, men in their class and their day-to-day interactions with people.

“I didn’t ask anybody to reveal anything that they didn’t want to reveal, and I didn’t ask for details if they did reveal, if they disclosed a sexual assault.”

“There was one woman who said to me, ‘If I get home from the university every day without someone trying to touch me, without someone leering at me, without some sort of unwanted attention, then it’s a good day.’ And I thought, ‘Wow, this is a much bigger issue than what we are talking about’.”

Why international student survivors are reluctant to speak up 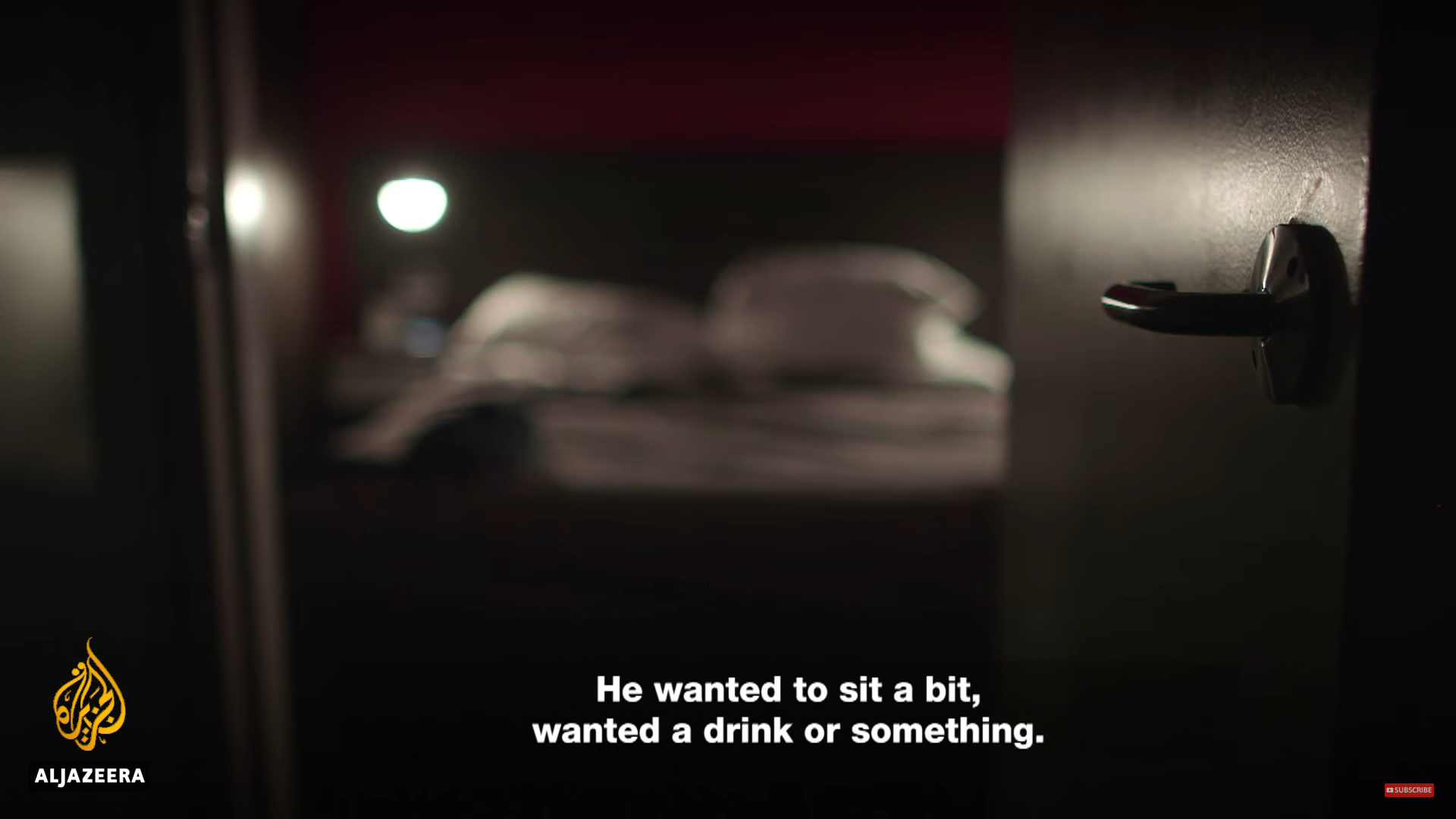 Callan met with many brave international students who were willing to share their stories. | Still captured from ‘Australia: Rape on Campus’

On more than one occasion, young women Callan spoke to expressed their difficulty in gaining support from family members back home.

“You are spending their money and coming this far away to study, and you got raped. It’s disgraceful,” said a survivor in the film.

One participant in Callan’s documentary expressed how growing up in a culture of internalised misogyny also made it difficult for young women to speak about their experiences.

“And then you can’t be open with your family and turn to them for support because they don’t see it that way at all,” she said. “And they might even be actually ashamed of you.”

Another young woman told Callan that her friends, also international students, gave misinformed advice. Although well-intentioned, they advised her not to report her rape as they believed Australian laws only protected Australians.

Culturally appropriate support was also not available to survivors who sought counselling.

“I heard a story about women going to counsellors who had absolutely no idea about the cultural background of the student, and who were saying very culturally insensitive things to them,” Callan said.

“It’s believing that Australia is doing them such a big favour by coming and studying there and they shouldn’t complain and that it’s not valid if you do complain,” Callan said.

“I think we need to be better equipping the international students who come to Australia to understand the culture they are entering,” she said.

Reception to Callan’s film after broadcast 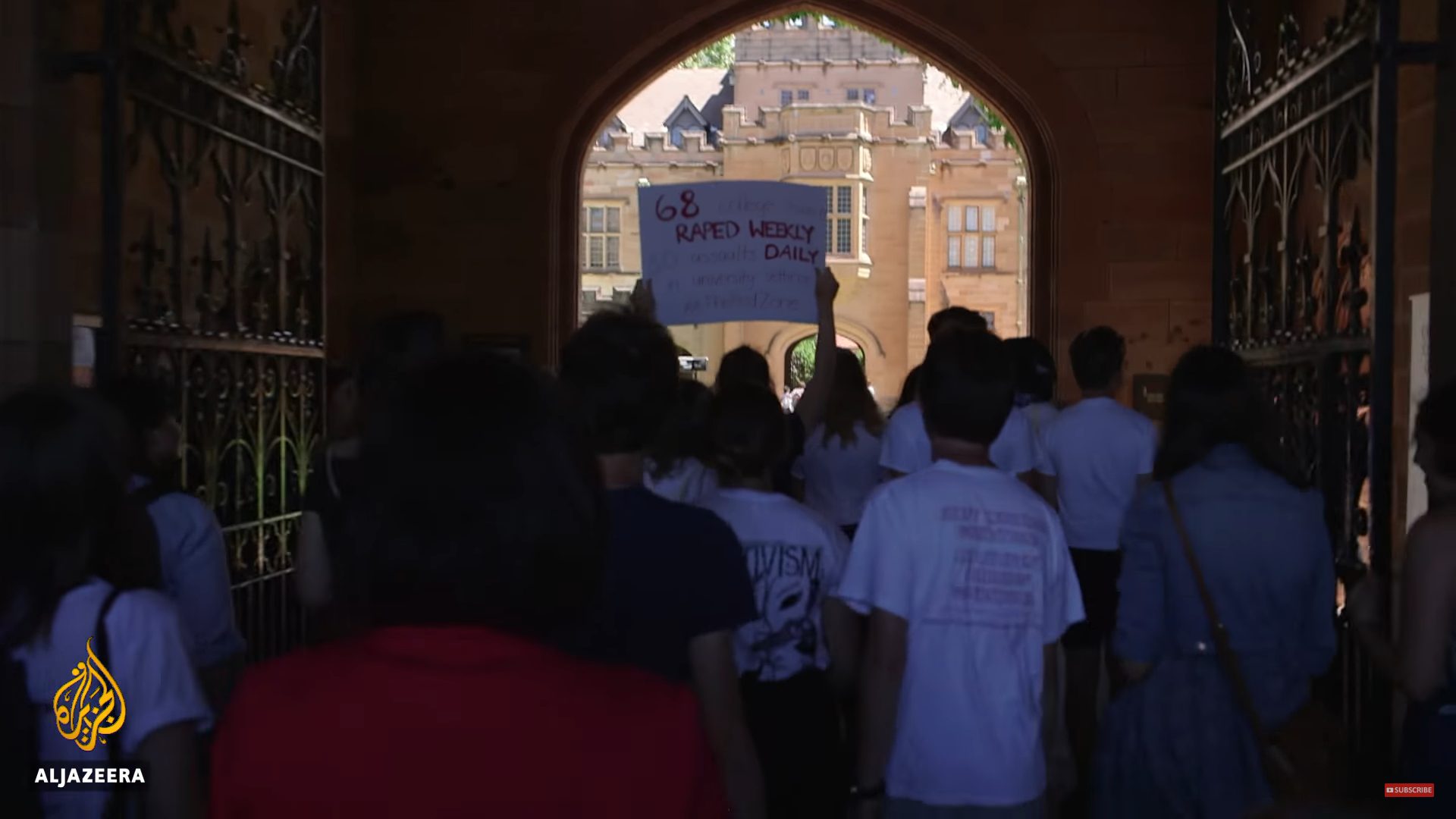 Students speak up about sexual assault on campus. | Still captured from ‘Australia: Rape on Campus’

Responses to Callan’s film came in swiftly following its original broadcast in April.

A day after Callan’s film aired on Al Jazeera, leading advocates End Rape on Campus Australia, The Hunting Ground Australia Project, Fair Agenda and National Union of Students, published a joint statement calling on the Australian Government to take action and intervene to ensure the safety of Australia’s international students.

Several weeks later, SBS News published its own investigation, looking into the quality of support provided to international student survivors at Australian universities.

The responses SBS received from the 26 universities it contacted varied. Some universities made statements to say they were working alongside their international student community to create services that would be tailored to their needs. Others added that no additional plans were in place to make consent tests available in different languages.

“It’s so powerful seeing these women speak without fear, without shame and putting their face to this issue.”

Callan’s documentary has also been well-received internationally. While she commended the bravery of all survivors featured in the film, she also recognised the challenges that came with breaking their silence.

“It’s difficult when your stories go to air, and when everyone at your university is talking about you and you are ‘that girl’ who was raped,” she said.

“It’s particularly difficult when media in their home countries pick up on the story and change facts and misquote and re-edit the story which was something I really wasn’t expecting,” Callan expanded.

Nevertheless, the students featured in her film remain committed to the cause, firmly believing that by speaking up, they too can inspire others to share their stories.

“It’s so powerful seeing these women speak without fear, without shame and putting their face to this issue,” she said.

“They’re the first ones to stand up and talk about it [and] they hope more people will follow.”

“We can do better” 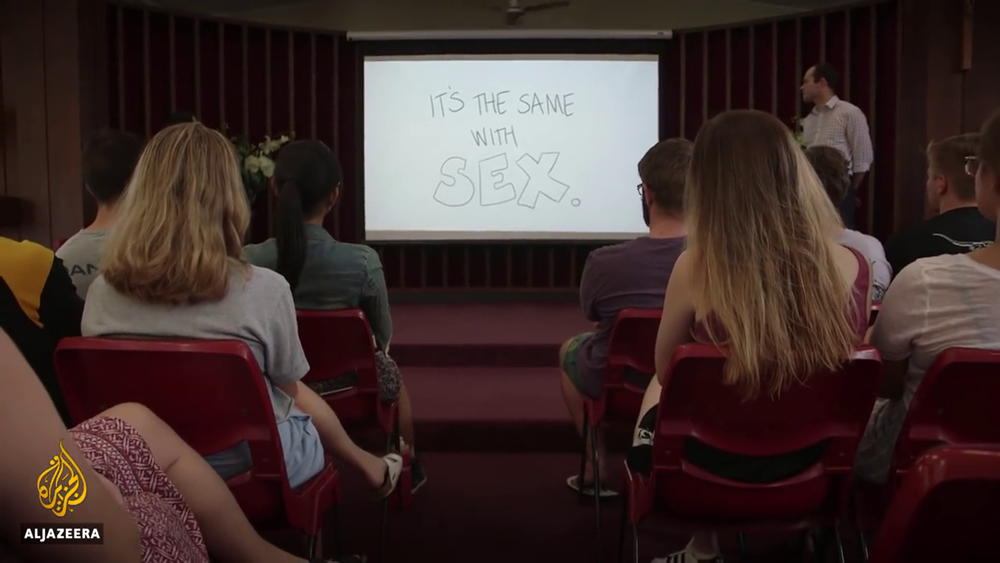 Policies such as consent training on campus are being implemented to ensure students understand why consent matters. | Still captured from ‘Australia: Rape on Campus’

Creating this documentary has been transformative and healing in more ways than Callan could have imagined.

For the survivors in her film, the documentary provided them with an opportunity to simply be heard and feel vindicated; something that is often ill-afforded to Australia’s international students.

And as a survivor of sexual assault herself, returning to her home country to produce this documentary also gave Callan a chance to reflect.

“Looking back and coming to Australia and doing this film almost felt as if I was a foreign correspondent in my own country.”

Callan saw her experiences, and those of her own university friends when she was a student, reflected in the stories of international student survivors she spoke to.

“One of the striking things for me was when I was had this conversation with my friends, my very good friends from my university time, they all said ‘Yeah that happened to me too’. We were very much suffering in silence, because we didn’t know that we could reach out for help, and we didn’t know that each [of us had been] going through the same thing. We even had given each other really bad advice at the time.”

While coming back to explore local discourse around consent, rape and sexual harassment in relation to Australia’s overseas students was not always easy, Callan hopes the documentary will inspire others to rethink the way we approach the issue in this country.

“After I made a film on gang rape in Cambodia many years ago, I had a lot of my Australian male friends say to me, ‘Oh, that’s terrible – thank God it doesn’t happen here!’”

“And I looked at them and said ‘What made you feel it’s not happening here? What makes you feel that this is an issue that’s confined to countries over there?’”

“So for me, coming back and telling this story about my own country was very enlightening for myself and for the people around me because we don’t often turn the view back on ourselves.”

Since the release of the AHRC’s survey results, Universities Australia has implemented a 10-step guideline on how universities may respond to on-campus sexual assault and additional guidelines to support those who report sexual harassment and assault.

And in the past 12 months, universities have begun implementing new policies to ensure its students are safe and equally educated around such issues. Some of these have included the delivery of online consent training, the launch of internal policies that address prevention and response frameworks, and improving their survivor support network.

It hasn’t been without a measure of scrutiny, however. Newer reports on university sexual violence show that sexual discrimination and harassment is still ongoing, such as this survey focusing on PhD students and academics which indicated that 48.7 per cent of its participants suffered from sexual harassment in workplaces.

Student representatives and advocates have also been vocal in their critique of universities. In early August, one year after the AHRC report was originally released, students rallied on campuses across Australia demanding their universities take more productive and comprehensive action.

Only time will tell whether current or future policies will hold up and meet the needs of Australia’s growing population of culturally and linguistically diverse student community. For now however, Callan will continue to work in this space to help make the worlds of survivors a little less lonely.

“I hope that international students hearing this and seeing this, know that they are not alone. That they can come forward and seek help. That they will not have anything happen to them. That they would not have people in their family find out that if they don’t want that. I think that’s the first step.”

Students who need to talk to a counsellor or who wish to receive web support may use the hotlines and links below.

Those who feel more comfortable speaking in their own language about sensitive issues such as those explored in the article above may call also the Translating and Interpreting Service (TIS National) at 13 14 50 and tell them to contact any of the numbers below.