Holi is a festival most of us know as an Indian festival of colours. And miles away from its origin, Melbourne was splashed with a rainbow of colours.

It is an important festival celebrated annually to mark the end of winter and signify the triumph of good over evil. Holi never falls on the same day, because it is scheduled based on the cycles of the moon. Although it is an Indian festival, it has become widely celebrated across Australia, Singapore, the United States and many other parts of the world.

The 2021 Holi festival was held at Birrarung Marr over two days, with something for everyone – from Bollywood music, Indian street food, stalls for colours, to fun rides for kids. Under the blasting and exciting tunes, people snacked on delicious Indian street foods and kids ran around with their water guns, pouring water on anyone who came in their way.

The event was organised with proper COVID-19 precautions, with registrations for contact tracing and temperatures taken upon entry.

As people of various ethnicities and backgrounds came together for the event, it created a multicultural celebration. 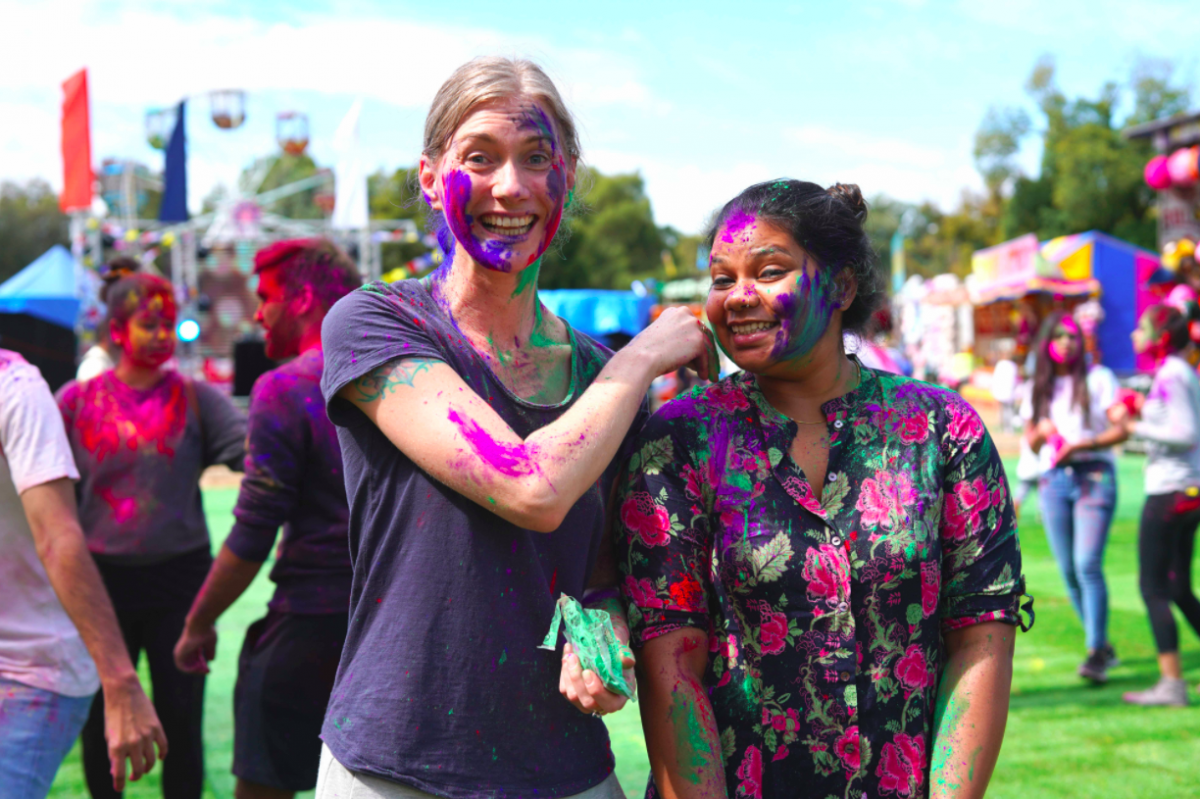 Lucy’s first time playing Holi with Anubha- looks like she is on the right track. Credit: Yuchen Liu from Meld.

Lucy, who grew up in Australia said, “I always wanted to be a part of the festival and was happy to finally have the chance to join the excitement this year. Thanks to Anubha for telling us amazing stories.”

On the other hand, Anubha from Delhi, India was excited but was missing bhang (a traditional drink with a little something in it *would suggest to google it*). Fun fact – I have never tried bhang! 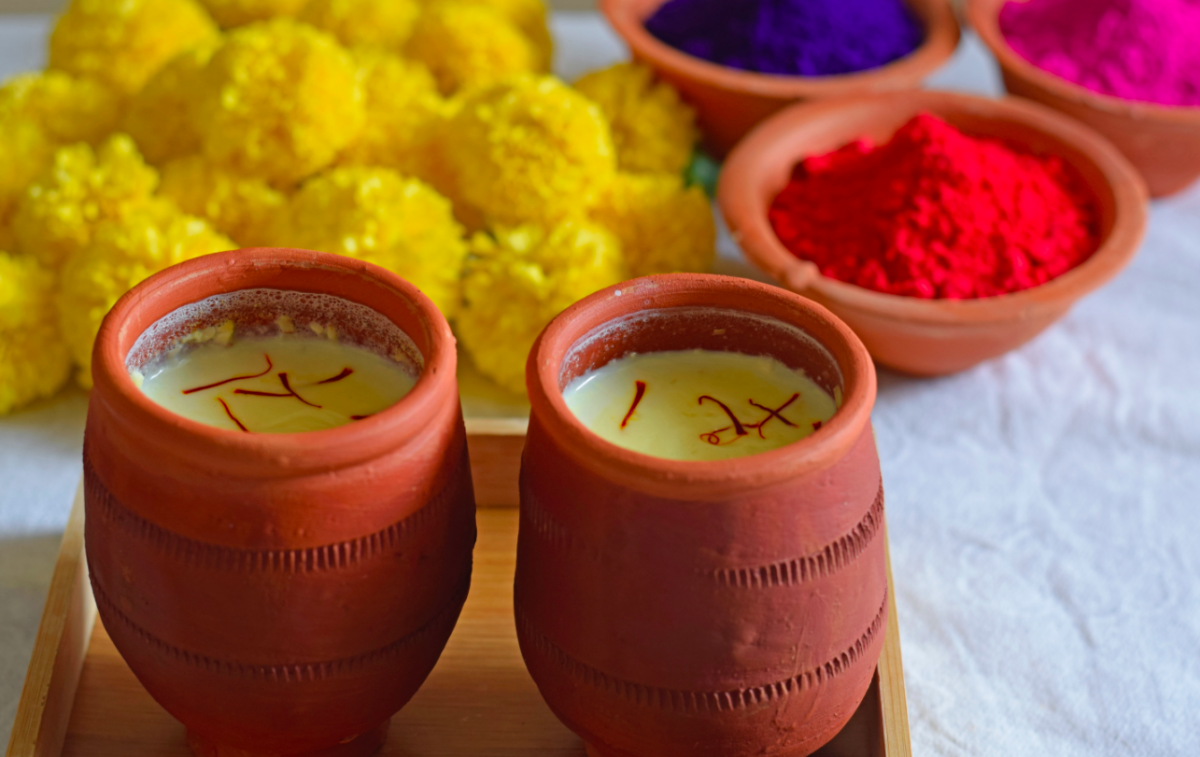 The drinks that were missed a lot. Make sure to have them at your own risk. Credit: Jyoti Singh from Unsplash

Amna from the Philippines came with the RMIT Mates community who meet and explore Melbourne together. As one of the mentors, she came with a group of students.

She told us that it was her first time attending a Holi event after learning about it from one of her Indian friends. It was a new and surreal experience for her and she was excited to colour everyone on the floor. 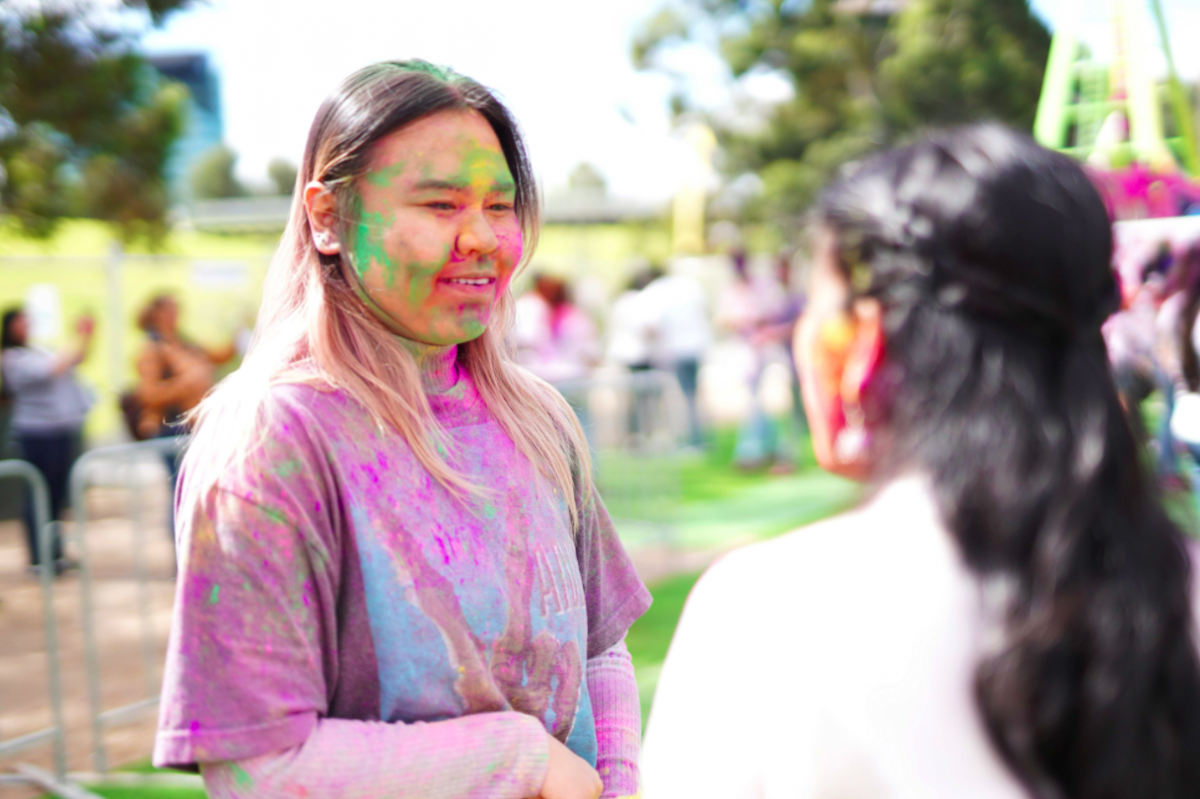 Lovely Amna from RMIT, talking about her experience with the festival. Credit: Yuchen Liu from Meld 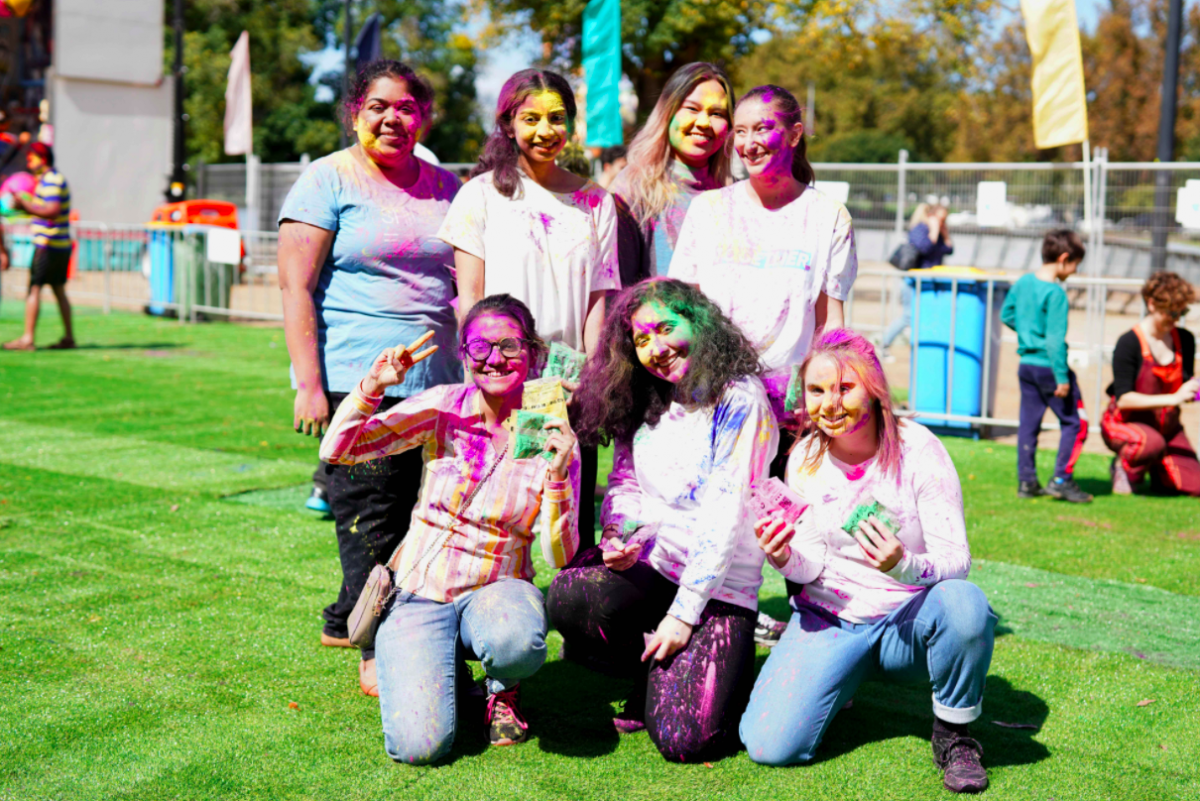 Does it look like it’s their first time playing Holi? The RMIT group are already pros! Credit: Yuchen Liu from Meld

Karen from Lebanon who also came with the RMIT Mates said, “It’s my first time attending this event. I saw pictures of Holi and I am so excited to play.”

The organisers were a lovely group from University of Melbourne (UniMelb) who undoubtedly stole the show, being the first ones on the floor and the champions of covering every single person with bright colours (including me)!

Kirtana from UniMelb said, “I started hanging out with my seniors and made plans to attend this event.”

Like many others, it was their first-time celebrating Holi in Melbourne and they wanted to make the best of it as they couldn’t travel back home. They splashed colours at each other and danced to Bollywood songs. 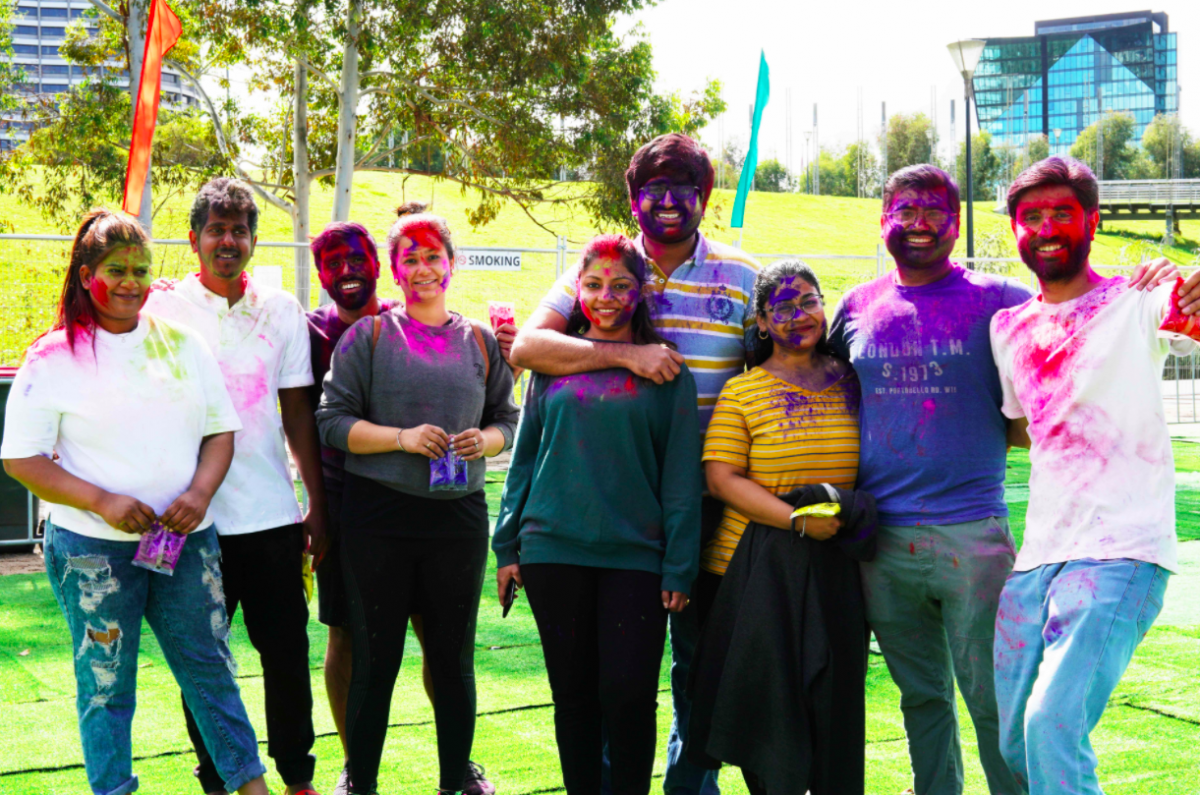 The stars of the event – a lovely group from University of Melbourne. Credit: Yuchen Liu from Meld

In India, Holi is a two-day festival, where people light pyre on the first day to signify the burning and destruction of demoness, Holika. The second day is spent smearing coloured powder all over each other’s faces, throwing coloured water, having parties, and dancing under water sprinklers. 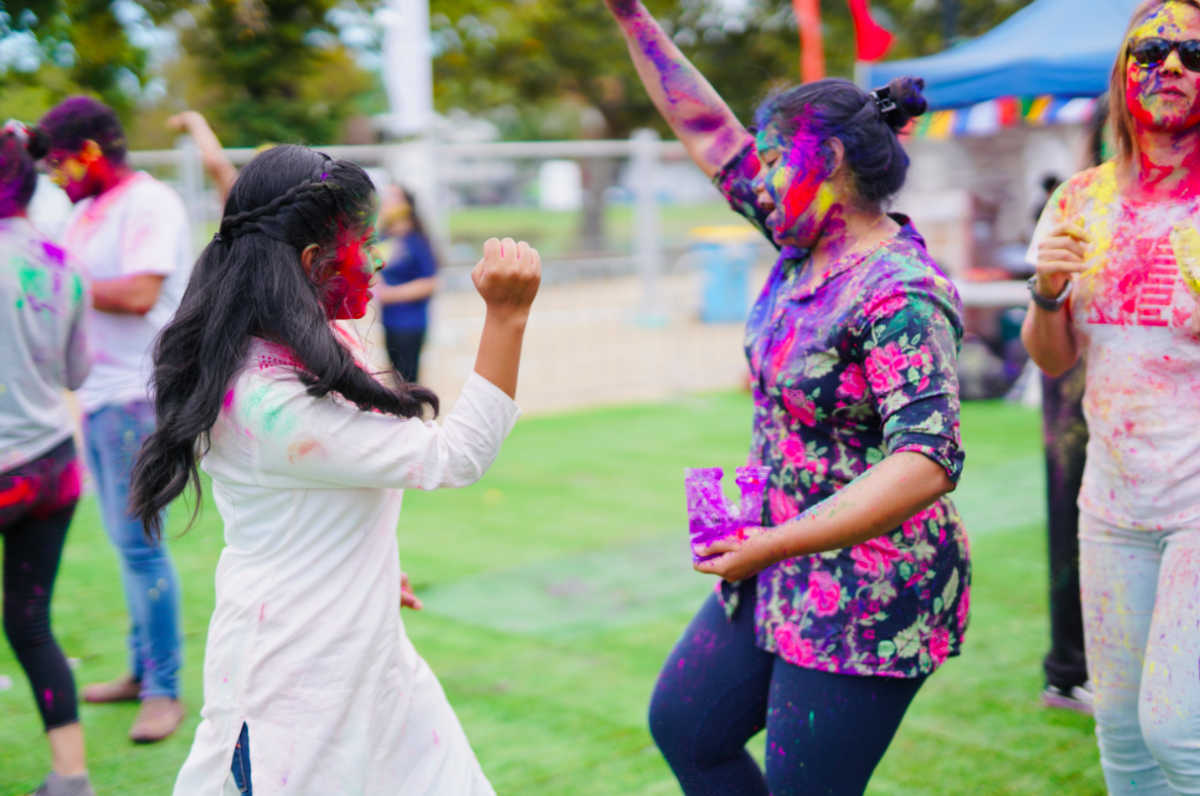 Need some Bollywood dance inspiration? Do not copy these moves unless you want people staring at you. Credit: Yuchen Liu from Meld

My favourite thing about Holi is the traditional sweet dish called Gujiya. It is a crispy pastry filled with sweet khoya (milk solids) and dry fruit stuffing. Gujiya is a traditional North Indian dish, but things that melt in the mouth don’t abide by any such boundaries. 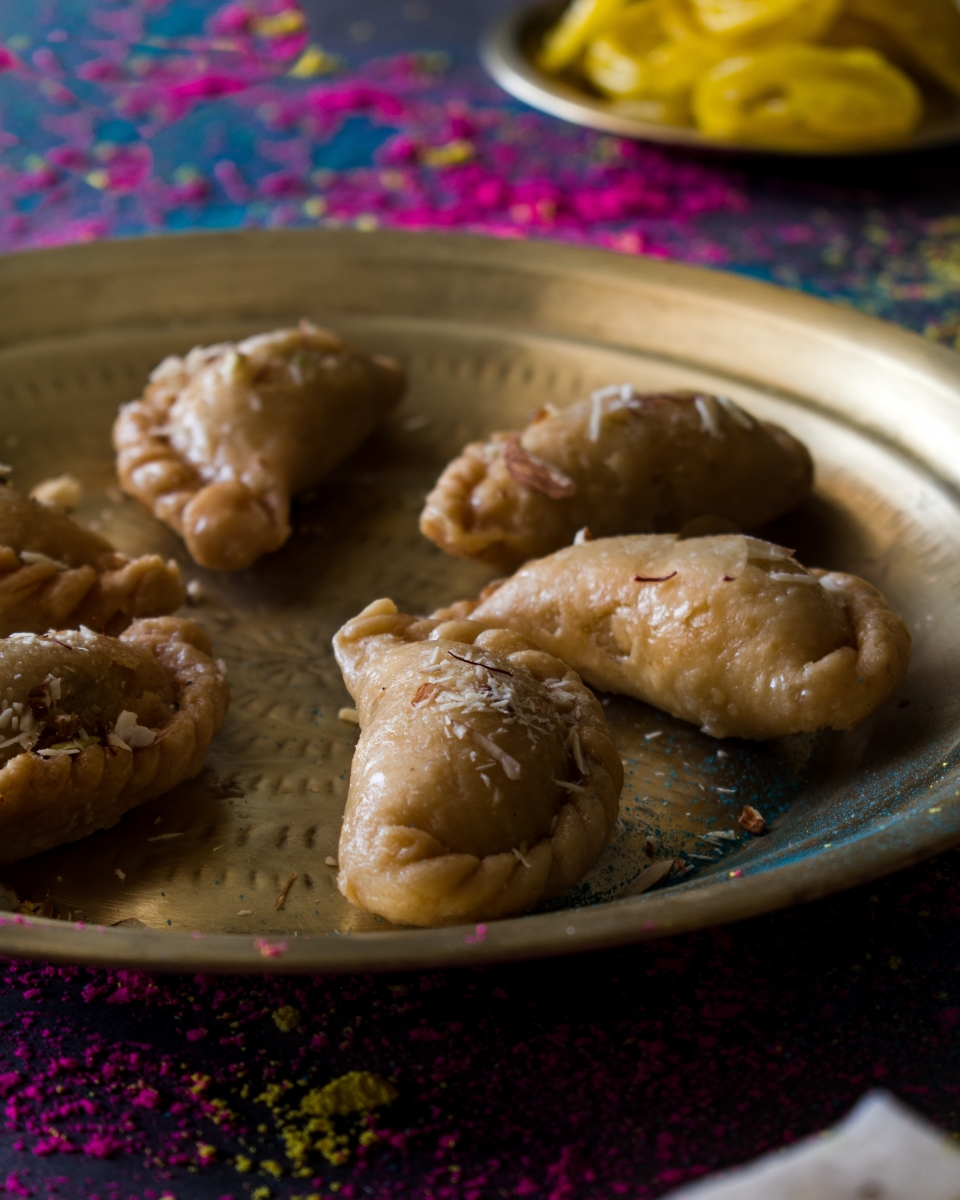 The event was an escape for some and a new experience for others. Being in a situation where you are bound with travel restrictions, this event was an amazing opportunity for international students to meet new people.

Unlike the other Indian festivals, there aren’t any religious rituals to perform on Holi -it’s a simple day for fun. Being away from home, I did not expect to meet and celebrate with so many people.

The pandemic has been tough on all of us but this event was proof that no festival belongs to one culture. Rather, it’s about sharing with others and being a part of it together.